Last Day Rules: Survival is an online multiplayer-only survival sandbox game on mobile platform. The objective of the game is to response the call of your duty: Survive in the last day on earth wilderness using gathered or stolen materials. Players must successfully manage their hunger, thirst, and... xem thêm

Last Day Rules: Survival is an online multiplayer-only survival sandbox game on mobile platform. The objective of the game is to response the call of your duty: Survive in the last day on earth wilderness using gathered or stolen materials. Players must successfully manage their hunger, thirst, and health to survive in this after life world, otherwise you will be dead by daylight. Despite the looming threat of dangerous wildlife, the primary menace is other players due to the game being solely multiplayer. Combat is accomplished through firearms and handmade weapons. These can be defeated with rust. The game features crafting, which was fundamentally modified throughout development, which is initially limited until the discovery of specific items in the game's open world. To stay protected, players must build bases or play with friends and join clans to improve their chance of survival. Raiding is a major aspect of the game and is done more frequently by large clans. Actually, this game is Last Day No Rules: Survival. Survival is your call of destiny.

Game Features
The whole Island is your backyard in Last Day Rules Survival.
Yep, as long as you wipe out other players first. Anyway, the vast map is bigger than any game you have ever seen. Explore every inch of the last day deserted island - an abandoned mine, post-world airport, a broken-down college, a freezing cold forest up in the highlands - to scavenge essential materials in order to survive in life after civilization. As a multiplayer online surviving game, you can build clans with your friends from real life or from the game and watch each other’s back. And beware of threats and dangers from all sides.

Survival is your only goal
At the beginning, a player only has a stone axe. These basic tools can help you cut down trees and break apart stones. Raw materials such as woods and stones could be found in the wilderness and you can collect them through cutting trees and mining. To survive in the world, the player must gather resources and use them to craft tools, weapons, and other equipment. To craft items, the player must have a sufficient amount of all required materials, with advanced items need more obscure components scattered around the Last Day world. Survival is the call of your duty in this open world.

Build whatever you want
Explore infinite world and build everything from the simplest of homes to the grandest of castles and keep it away from rust. Gather different materials from various environments such as Ice Field, Desert or prairie to customize your building appearance, craft weapons and armor to fend off dangerous mobs. Create, explore and survive alone or with friends on mobile devices.
Open world environment with the sole goal of survival. Animals, such as wolves and bears, act as a looming threat, but the primary danger comes from other players. Let go your imagination, you deserve it at this last day on earth！

Last man standing
As a multiplayer-only video game, players fight against each other in Last Day world，Player vs player (PVP) combat is accomplished with melee weapons and producible guns. Bullets and other projectiles travel in a ballistic trajectory, rather than being hits can. There are a number of different types of bullet for each gun, including high velocity and explosive, thus allowing for more diverse strategy. Hit tracking calculates damage; shots to the critical parts are more damaging than shots to other parts of the body. The use of weapon attachments, such as sights, provides an advantage over opponents. Becoming Last Man Standing is your call of duty in this Last Day No Rules: Survival World. 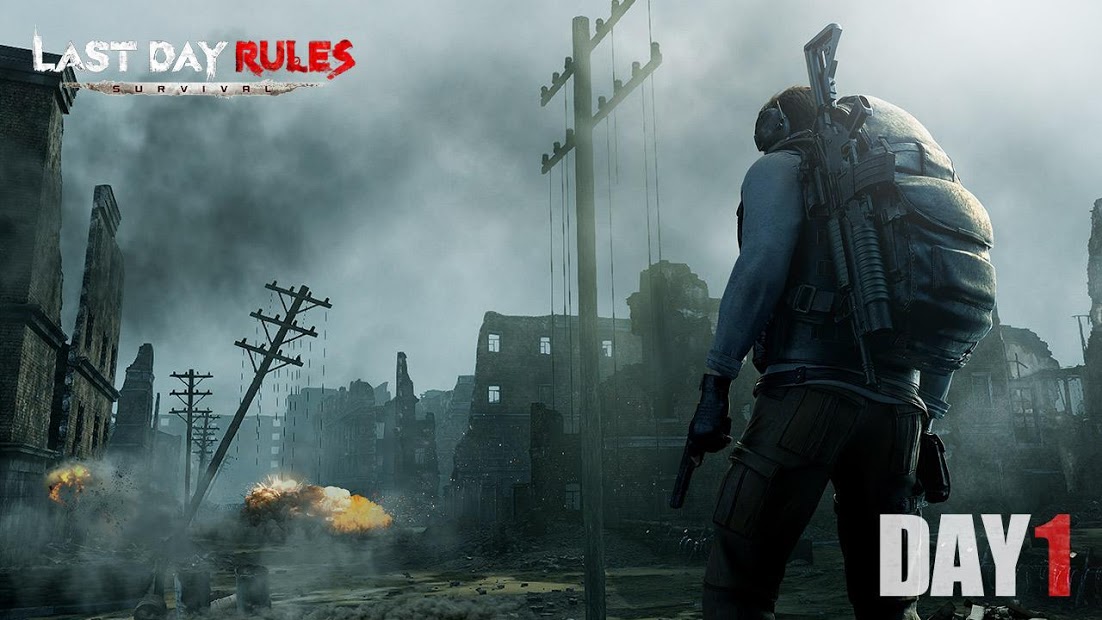