Something is ripping the cosmos apart, sending whole galaxies into oblivion. But what? Daleks and Cybermen are working together, Silurians have toppled humanity to create a new empire and old friends and foes are joining forces as the universe faces its greatest ever peril. Only you, the Doctor’s new companion, can prevent armageddon and avert the events foretold in a chilling prophecy! Think you’re up to the job?

Different Doctors will guide you as you become central to an adventure that weaves over 50 years of Doctor Who history into one ground-breaking story. Ever wanted to fight alongside Sarah Jane Smith, Amy Pond, River Song, K-9, Benton, Captain Jack and many other of the Time Lord’s allies? Good! Because now you’ve no choice! From the foggy streets of Sherlock Holmes’ London – where you’ll meet the Great Detective – to back where it all began… You are the hero, trusted to build unique and powerful decks of cards to strategically win challenging battles, and unravel the epic story that involves new adventures and some classics revisited – with a few deadly twists!
This game is your best chance to collect special edition cards, assemble your dream team and summon companions to attack and defend you against villains determined to destroy Earth. It’s guaranteed to be dangerous, unpredictable, but FANTASTIC!

A VOYAGE THROUGH A POCKET UNIVERSE
* Brand new story scripted by a Doctor Who writer and developed in conjunction with the producers of the BBC TV series
* Work with (and against!) the Time Agency, UNIT, The Cult of Skaro and a secret double agent!

ALL OF DOCTOR WHO LORE IN ONE PLACE
* Over 200 cards with your favorite characters from the show
* Cards with special rarities, abilities and powers to learn and master
* Handy upgrades to spur your advantages

DEFEND TIME AND SPACE
* Pick the most powerful cards to assemble decks with unique traits for each faction
* Deal damage, restore health and replenish the TARDIS energy over time
* Worthy reward-boxes full of wondrous new cards!

TIME EVENTS
* The TARDIS phone is bound to ring off the hook – and you’ll need to answer it
* Three times a day you will be called into action to face intense battle!

TRAIN LIKE A TIME LORD
* Stats to power up your odds: wisdom, strength and dexterity can all be built up on your path to victory
* Infiltrate and explore each faction’s story and play a critical part in saving all of time and space
Work out your own tactics and embark on this thrilling adventure. Allons-y! 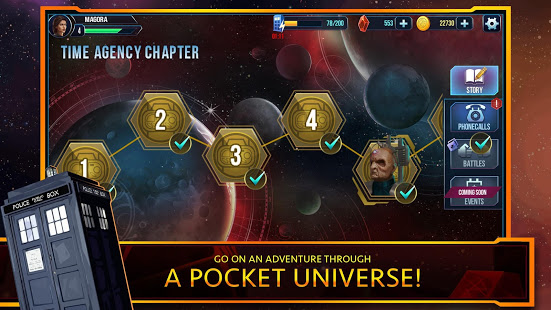